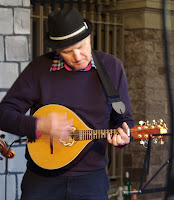 Phil is a multi-instrumentalist and plays the mandolin, mandola and fiddle. He also sings and arranges many of our songs. Originally from the North of England, Phil has been a Treorchy resident for more years than he cares to remember. He played fiddle in the folk and ceildih band Fairstead (formerly The Old Tradition) who gigged all over Essex throughout the 1980s. A prolific songwriter and arranger, Phil's love of Irish traditional music has been a constant in his life and his beautiful mandolin playing is the backbone of The Hairpin Bend. 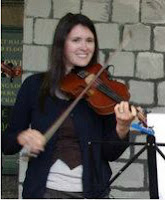 A fine fiddler, Eleanor first picked up the violin aged 7 and is classically trained. Having always enjoyed listening to Irish music, she first got into playing the fiddle when she joined an Irish band after becoming a member of the Reading University Folk Music society. She moved to Cardiff in early 2008 and, after a spell spent obsessively watching Irish music videos on YouTube and practicing Irish style fiddle, she joined The Hairpin Bend and has never looked back. 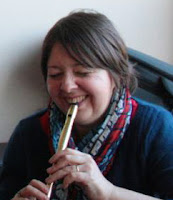 Thomasin is another multi-instrumentalist, playing the tin whistle, flute and harmonicas for the band. From her previous incarnation as a jazz band musician, Thomasin brings the smooth tones of the flute to folk songs and the evocative sound of the tin whistle to traditional tunes. If she has any breath left she has been known to get out the harmonica!

Other members:
Sadly, after five years, guitarist Huw Chidgey has made the decision to retire from the Hairpin Bend and go down other musical avenues. We'd like to thank him for his hard work, musical talent (and the lend of his voice on occasion) and the fun we have had over the years.

While we search for a new guitarist The Hairpin Bend band is enriched at our gigs by various other talented musicians we know. Our contacts across South Wales include fiddlers, guitarists and wind instrumentalists.

Please send us an email to discuss your requirements.